Max De Pree wrote about the true meaning of diversity in his book, Leadership is an Art, back in 1989.

My father is ninety-six years old. He is the founder of Herman Miller, and much of the value system and impounded energy of the company, a legacy still drawn on today, is part of his contribution. In the furniture industry of the 1920’s the machines of most factories were not run by electric motors, but by pulleys from a central drive shaft. The central drive shaft was run by a steam engine. The steam engine got its steam from the boiler. The boiler, in our case, got its fuel from the sawdust and other waste coming of the machine room – a beautiful cycle.

The millwright was the person who oversaw that cycle and on whom the entire activity of the operation depended. He was a key person.

One day the millwright died.

My father, being a young manager at the time, did not particularly know what he should do when a key person dies, but thought he ought to go visit the family. He went to the house and was invited to join the family in the living room. There was some awkward conversation – the kind with which many of us are familiar.

The widow asked my father if it would be alright if she read aloud some poetry. Naturally he agreed. She went into another room, came back with a bound book, and for many minutes read selected pieces of beautiful poetry. When she finished my father commented on how beautiful the poetry was and asked who wrote it. She replied that her husband, the millwright, was the poet. 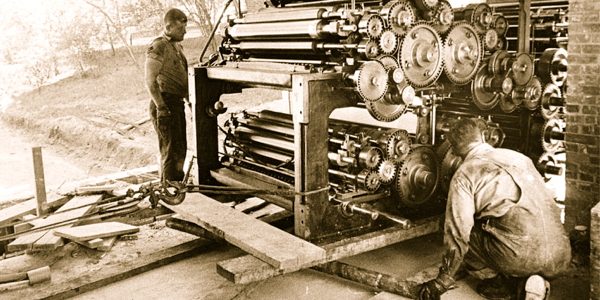 It is now nearly sixty years since the millwright died, and my father and many of us at Herman Miller continue to wonder: Was he a poet who did millwright’s work, or was he a millwright who wrote poetry?

In my own working life, I have often been acutely aware of arguments over titles, position descriptions, terms and conditions and struggles over places on organisation charts. I was trained to look for the rising stars, the foot soldiers, the problem children and the deadwood,  and to respond accordingly.

De Pree’s book, written nearly thirty years ago, made me look for the musicians, bakers, sporting coaches, parents, travelers, carers and volunteers. I found workers who sang in choirs, painted landscapes, produced beautiful pieces of woodwork and starred in Christmas pantomimes.  I recently discovered a construction manager who had started his working life as a calligrapher, only because I commented on his writing. I also found an aspiring poet and I still have a signed copy of his first published attempt at fame. He was a warehouse worker. Or was he a poet who worked in a warehouse?

No-one checks in their character at the security gate. Everyone we work with has a fundamental need for fairness and recognition in the workplace. Diversity managers and committees who carry that title, need to work to remove the unnecessary barriers and biases which prevent so many human beings from making the contribution that they are entirely capable of, and are often very willing to make. Unfortunately, diversity experts will often be seen focusing on Excel spreadsheets, reporting on numbers, and fudging the anomalies to indifferent or impotent government agencies. I sound cynical because I am. I am also sadly aware that reporting is usually the only activity they will be asked to undertake and be rewarded to perform. In many cultures, a genuinely brave diversity manager would be shown the door pretty quickly.

And what is the point in winning the diversity numbers game, if our behaviour is shaped by a need to survive in an insecure workplace, and we all end up marching to the beat of the same drum anyway?

Max De Pree wrote that leadership was about genuinely understanding people’s diverse gifts and talents and skills. It was about seeing that each of us is needed and admitting that we cannot know or do everything. The coldest of managers can be made to understand that the payroll is not simply a cost to be controlled, but it can be a source of undiscovered wealth and innovation.

Look again, said Max De Pree. The worker may be so much more than an incumbent.

Max De Pree passed away in 2017 at the age of 93. He stayed at the helm of Herman Miller for many years. It would be nice to think that this story, passed down through the company of Herman Miller, is not forgotten.

4 thoughts on “Remembering the Millwright”