In 1887, Nietzsche wrote; ‘one thinks with a watch in one’s hand, even as one eats one’s midday meal while reading the latest news of the stock market.’  Nietzsche blamed his habit of distraction on a human desire for haste. ‘Haste is universal because everyone is in flight from himself.’

Blaise Pascal wrote, earlier still, that the sole cause of man’s unhappiness is that he does not know how to stay quietly in his room. TS Eliot wrote of being distracted from distraction by distraction.

Today we sigh over new habits of being distracted by social media, gaming and the fact that we are getting our news in sound bites from Twitter or You Tube. We hit the brakes because pedestrians are so absorbed in texting, that they forget they are crossing a road. An employment agency in the US found that workers were spending an average of five hours a week looking at screens for things that are not related to their job.

At least technology has solved Fred Nietzsche’s problem of whether to put down the paper, watch or sandwich. Today he could check the stock market and know the time on his mobile phone. 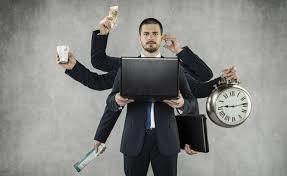 Constant distraction and its capacity to stop us from being focused is clearly not a new issue. We just have new gadgets to blame. Their  portability probably makes things a little worse. According to recent research from Roman Krznaric, 75% of us cannot sit on the loo without looking at our mobile phones.

In 2002 Mihalyi Csikszenmihalyi worried about excessive television, somehow absorbing or sucking out the energy of survey participants, leaving them depleted. No doubt he would be even more concerned with binge watching today.

In an article called The Distraction Society, Damon Yong suggested that constant distractions can weaken our faculties, leaving us unproductive, muddled and fettered. Other researchers point to diminished attention, depleted abilities to solve problems and lowered patience. Throw in the noise and distraction of the open plan office (that curse of modern life for all introverts) and ask yourself, what is this doing to our ability to produce good work and make thoughtful decisions?

In 2009 Eric Schmidt, the Chief Executive of Google raised his own concerns about the effect technology was having on us. “I worry that the level of interruption, the sort of overwhelming rapidity of information and especially of stressful information, is in fact, affecting cognition. It is […] affecting deeper thinking. I still believe that sitting down and reading a book is the best way to really learn something and I worry that we’re losing that.” The irony is that Schmidt’s organisation, Google, is among those who profit from and promote unrestrained internet browsing and the flickering shallow state of so much of our reading. Younger colleagues have boasted to me that reading books is ‘so old school.’

So should we strive to be more focused in the same way that our sedentary world now forces us to make time for fitness? Should we re-train our brains and discipline ourselves for more concentrated thinking times? Can we cure ourselves of the desire to glance one more time at our phones, laptops, the computer, the television and all the modern-day stopwatches?

Like most other bad habits, a wee bit of self-control may assist. We are free to turn off the ping noises on our emails and our texts. We can limit and ring-fence times where we will focus on other things. And no-one is stopping us from reading a book as opposed to leafing through soundbites on Twitter and Facebook.

What do you think? Is this new level of distraction a real concern, or just part of being human in a changing world?

3 thoughts on “Distrac…..oh look! A butterfly”