Journalist Richard Glover wrote a wonderful column about shocking the younger generations with his tales of office stationery. When he first joined the workforce, everyone had to convince the stationery gate-keeper that their pen (allotment, one) was indeed empty of ink before being issued with a replacement. “Don’t be ridiculous!” said bright young things to Glover, disbelieving his account of cruelty in yesteryear’s office.

On his radio show, Glover repeated the anecdote, only to have listeners begin ringing in with their own tales, of taking a pencil to the stationery monitor, only to have the one inch of pencil put into a sharpening device and handed back. Another listener recalled a metal sleeve that could be attached to the stub to extract a few more weeks out of a pencil and yet another recalled staples being given out one row at a time. Carbon paper had to be proven to be completely exhausted. Of course, a millennial today would ask; ‘what is carbon paper?’

How many of us marvel at the freedom and ‘absolute bloody luxury’ of the unlocked, help yourself stationery cupboard? My first experience of office life involved filling out requisitions to the stationery department. There was a small team of people who sat in a far-away office behind a roller door and they sent back our orders wrapped up like a ‘start of the school year’ parcel. This was also the era of the Telex, the last days of switchboards with plugs, post deliveries to your desk from a trolley and the tea lady. The tea lady stood guard over the biscuits and allowed us one each. As they weren’t chocolate coated, I decided to let her live. 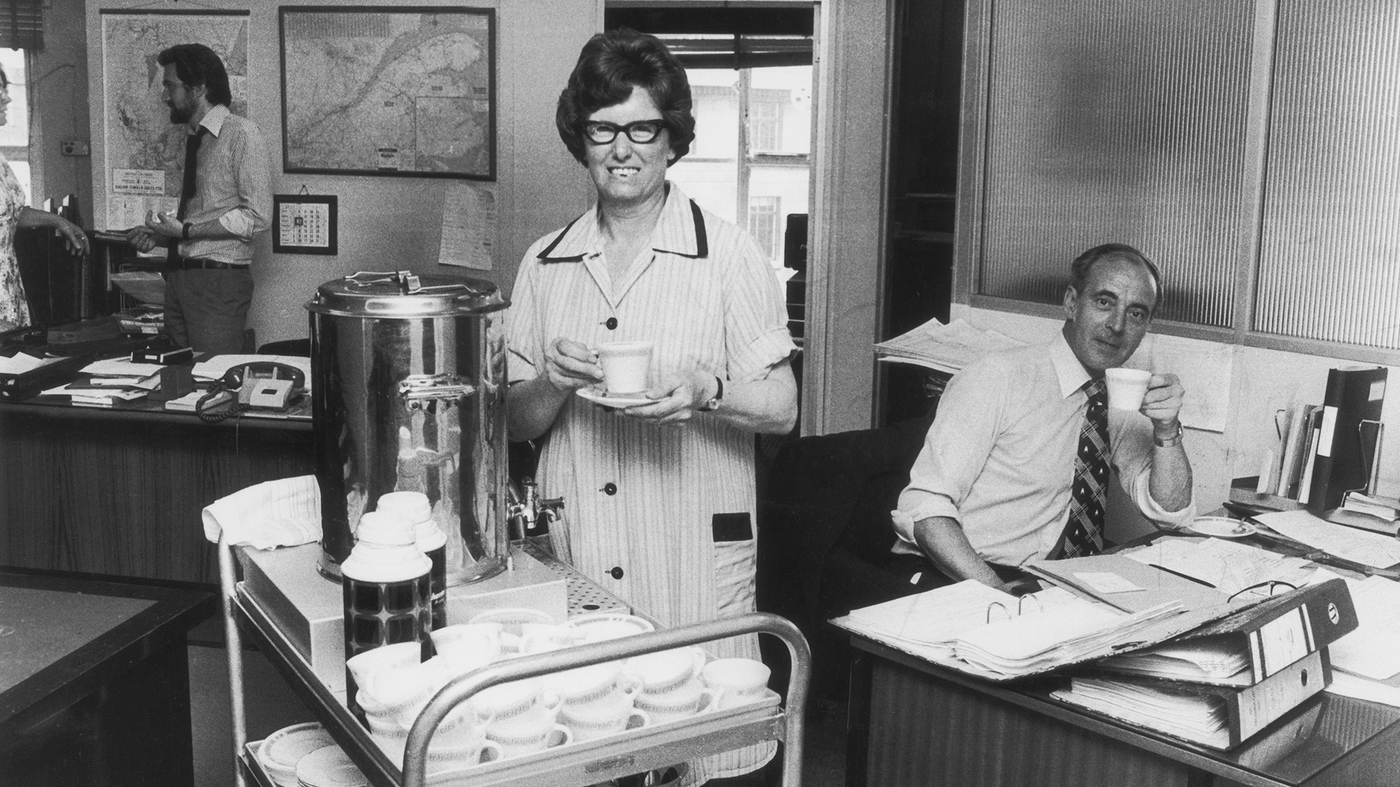 Photocopiers routinely needed toner and it was a brave person who handled this fine, black powder without a thought for their dry cleaning bill. It was also a brave man who leaned anywhere near a shredder wearing a tie. I hardly see a tie these days, but when I started work, I recall a young man being sent home to put on a tie, because he had turned up without one.

Work has changed and a lot of things have changed for the better. And then again, I think we lost a few things along the way. It may be the halo effect, but I think we had more fun. Of course, most of our humour was highly inappropriate, often alcohol fueled and offensive. Photocopiers did not do well after the Christmas party. Friday afternoons were sometimes written off after a long lunch.

We also expected to be corrected because we knew we had a lot to learn. I was talking to a senior partner in a law firm recently who said that graduate lawyers in his firm now took umbrage at having their grammar corrected.  And it’s a short hop, skip and jump to start hearing the cries, ‘you’re belittling me, you’re bullying me‘ from a generation who have been given classes in resilience, but clearly know very little about it.

Most of the things that had me in tears of laughter, would upset the easily outraged today. Somehow we survived the jokes. We learned to give it back. We endured the torture of rationed stationery and biscuits. We didn’t mind being told to dress appropriately.

Sincere apologies if you made it this far just to read about sex in the stationery cupboard.  Of course, if any older readers actually attempted sex in an office stationery cupboard, then I applaud your bravery. I would have been far too worried about the risks associated with paper cuts, scissors, staple guns and loose drawing pins. I had fun, but I wasn’t completely barmy.

8 thoughts on “Sex and the Stationery Cupboard”