I was a big fan of Australian columnist Philip Adams in my student years and have continued to read his columns in a weekend paper. I don’t always agree with him, but something I always found admirable was that he had achieved so much. He was prolific, and I aspired to be prolific, afternoon naps permitting. He seemed to lead several lives. He has been described as an advertising guru, writer, film producer, critic, farmer and collector. He was a pioneer in the Australian film industry.

Today he is mostly called a Broadcaster and hosts a national radio show. Philip Adams is a beautifully spoken man, a raconteur if you will, and is still asked for his opinion on many things. I used to wonder if he had more hours in the day than the rest of us or if he delegated the boring chores in life elsewhere.

I have used a comment he once made about his busy life, in various time management programs over the course of my career.

“When people say to me: how do you do so many things? I often answer them, without meaning to be cruel; how do you do so little? It seems to me that people have vast potential. Most people can do extraordinary things if they have the confidence or take the risks. Yet most people don’t. They sit in front of the telly and treat life as if it goes on forever.”

I have kept this quote nearby for a long time. Life does not go on forever. To me, this message said, “Set some goals! Do something! Do not kid yourself by saying, “I’ll get around to that, one of these days.”

One of Adams’ claims to fame was a national advertising campaign in Australia called Life. Be in It. This was an attempt to get Australians away from watching TV and to the great outdoors to take part in life. One of the stranger side effects of this campaign to ward off obesity, was that schools, like mine, were given things like giant Earth Balls to chase around. Senior citizens were encouraged to play games and buy sneakers. You have one life, the campaign reminded us all. “Be in it, today, live more of your life,” went the catchy jingle. 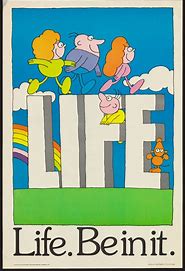 It is decades since the Life, Be In It campaign. Adams has recently written a column called I’m Wasting my Precious Time.  At first it appears to be something of a volte-face, but I suspect it is simply the wisdom of a 78-year-old man.  He writes that he now regrets not having wasted more days, instead of being ‘so busy being busy, cramming ambitions, careers and diaries.’

“Watching birds is better than binge viewing. Playing with children is better than watching other people play cricket. Playing with dogs is more therapeutic than Freud. There is much to be said for saying nothing, for silence undisturbed by conversation or earpieces. Reading books is recommended. Long, lingering, uneventful time devoted to scenery has much to recommend it. Art in general seems a very good way to waste time. Music, dance and drama are methods of intensifying time, paradoxically making it last longer and pass quicker. Looking up is recommended, particularly in the bush on a cloudless night. There are no better ways to experience time than to waste it.”

I’m not sure Adams has really changed his tune at all. The message, for me, remains that of, Life, Be in It. Think about the fact that your life is not going on forever. He is simply redefining the good life.

It was a timely read. I had gone back to the working year without a proper recovery and within the first fortnight back, I made four return flights, in economy, jumping on planes at dawn and getting home far too late for dinner.  I was already tired by the start of February.

I did not think I was at the fully martyred end of the busy spectrum. I sat next to people hunched over laptops on flights, desperately trying to work in a space that was inhuman, and I refused to join them. I insisted on looking down at the landscape below if I possibly could, by asking for a window seat.  I always carted my latest paperback with me, so I could read mid-flight. If I am asked about my plans for the weekend, I am quite happy to reply, ‘absolutely nothing.’  And yet I still need to constantly remind myself to look up, slow down and breathe.

Because The Rolling Stones were quite wrong; Time is not on our side. It is running out all too swiftly. Life is a constant juggling act. It will be a long time before I ditch all the To Do lists, but I’ll keep the Adams column handy and try to remember to look up at the night sky and the scenery more often.